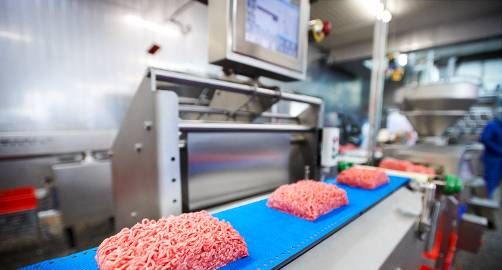 Optimum hygiene is vital when it comes to portioning and filling systems for highly sensitive foodstuffs. While developing its “CWP Neptune” wet area checkweigher (process scales), manufacturer Bizerba closely based its design on Rittal’s modular “Hygienic Design” (HD) range. Systematically proven components were taken over from the Rittal HD range for the Neptune series system concept. Launch customer and partner for the prototype development was the fresh meat specialist “Westfalenland”.

“Never before have we had process scales that could be cleaned as easily and with such high availability. A clean solution to the problem – that’s how I weigh it up!”
Michael Huster, Technical Director at Westfalenland

EHEDG specifications as a guideline

The checkweigher has been designed so that all hygienically sensitive areas remain unobstructed and are easily accessible (in line with EHEDG specifications). The use of curves and diagonals ensures that detergents and water flow off on their own without remaining or even accumulating.

The front cover and conveyor belt can be removed in a few simple steps, so that the unit can be easily cleaned. The electronic components are packaged to protect them safely from water. One feature in particular: The load cell, the real heart of the system, is hermetically sealed and so fully guarded against penetrating and condensing water.

The number of individual components in the new checkweigher has been reduced. It only needs a single conveyor belt and just one motor. Cleaning cycles are kept short thanks to the way the entire system has been built.

The entire control system for the conveyor belt and the load cell are housed in a Rittal HD enclosure. Instead of conventional closure systems, a special HD-lock is used and the outer, resistant silicone seals prevent product being deposited. Patented cable entries as per protection class IP 69K allow the system to be washed down with high-pressure cleaning equipment.

As launch customer and partner for the prototype development, Westfalenland was already able to introduce its practical experience and requirements into the pre-production series. Immediately after leaving the IFFA 2010 trade fair, the prototype was sent to Westfalenland in Münster, where it was put directly into service on one of the portioning and packing lines for freshly ground meat, running in two-shift operation.

The company was so impressed by the new checkweigher that it has now integrated a further five Neptune series devices in its production facilities.

Every 24 hours, the complete minced meat lines – including the Bizerba checkweigher – are thoroughly cleaned with foam and at low pressure before being disinfected.