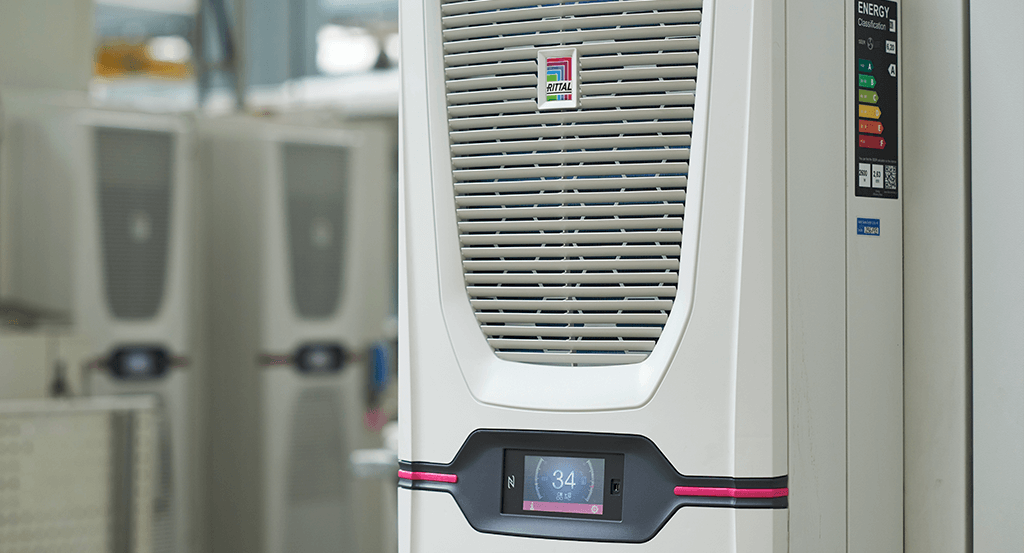 Getting access to Nestlé’s coffee research center in Orbe, Switzerland is like getting invited to visit a maze.

Multiple production lines, machines, and control panels have been installed in the rather small production building of the Nestlé Production Technology Center (PTC). In this test factory, developers solved the challenges of engineering Nespresso capsules before they were produced for the first time. Similarly, the freeze-drying process for roasted coffee has been undergoing optimization there for decades. Successful product innovations make Nestlé’s PTC research center an important reference point for the use of new process technologies.

The PTC relies on the expertise of a number of partners which prepared the company to take part in a comparative test that would demonstrate how Rittal’s Blue e+ could operate with greater energy efficiency compared to a standard Blue e cooling unit.

“We are always motivated to help genuine innovations make a real breakthrough.”

A focus on reducing energy usage

In the food production industry, efficient and consistent process heating and cooling are a necessity. In addition to the energy consumption of refrigerated storage and rapid freezing, the cooling of electrical controls also consumes energy. To achieve the proper climate, heat has to be continuously dissipated to help ensure a constant temperature within an enclosure.

Rittal approached Nestlé PTC with the proposal to conduct a comparative test between a conventional Blue e cooling unit and one of the latest Blue e+ models. Each unit was mounted

on two identical Rittal enclosures in operation at the factory. The Blue e+ unit quickly demonstrated massive improvement in energy-efficient cooling as the results to-date show a 72% reduction in energy usage compared to the standard Blue e cooling unit.

The benefits of passive and active cooling

Enclosure cooling is making a quantum leap forward with the latest generation of Blue e+ wall-mounted cooling units in large part due to the innovative use of two heat transfer technologies in one unit.

First, a speed-controlled compressor ensures optimized cooling capacity. Second, a heat pipe containing refrigerant is installed that increases in volume regardless of whether the refrigerant is in a liquid or vaporous state.

Once inside the evaporator portion of the pipe, heat is transferred from the interior of the enclosure to the liquid, which then evaporates immediately. This causes a pressure gradient inside the pipe that results in steam to rise near the condenser. The latent heat previously absorbed is released into the ambient air and the refrigerant changes its state of matter from gaseous to liquid again. The liquid refrigerant then flows back into the evaporator through gravitation and the cycle starts again.

Consistent temperature inside the enclosure is ensured by means of three modes of control: heat pipe mode, hybrid mode (heat pipe and compressor), and cooling circuit mode (if it is warmer outside the enclosure than inside). The device also offers digital interfaces so data can be evaluated immediately and alerts or notifications can be sent to a smartphone or other digital device.

This is the kind of innovation the Blue e+ provides to help in simplifying the complexity of industrial climate control systems.